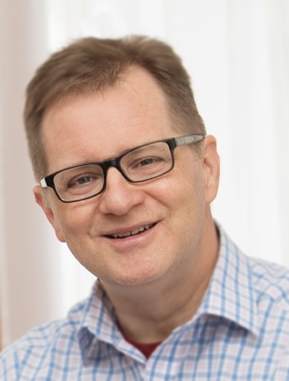 Michael Leathers is a member of the Dramatists Guild. His full-length play, Merely Players, began as a 10-minute sketch featured in Festival of Ten VI at The College of Brockport SUNY in Brockport, New York, in February 2009. The next step in its evolution was as a one-act play when it was given three public staged readings as part of The Mike Dobbins Memorial New Plays from the Heartland, Heartland Theatre Company’s one-act play Midwest competition, in July 2014 in Normal, Illinois. The Monroe Actors Stage Company in Waterloo, Illinois, staged a full-length version of the play in October 2020 for four performances. In addition to Merely Players, three of his 10-minute sketches have been performed at Second City as part of the Chicago Dramatists/Second City Training Center's annual comedy competition. Chicago Dramatists selected a fourth sketch for a public reading in its ongoing 10-minute sketch workshops. His work has been featured in festivals in Michigan and New York. He also writes sketches for church worship services available at RileysDiner.com. Four of those sketches have won either the best comedy or best drama award from Christians in Theatre Arts’ national sketch-writing competition. His work on the stage was primarily in college theater where he portrayed Sgt. Gregovitch in Teahouse of the August Moon, Herbert Soppitt in When We Are Married, Flute in Shakespeare’s A Midsummer Night’s Dream and Father Brian Rivard in The Runner Stumbles. He and his wife, Tammy, live in Chatham, Illinois. They have one son, Geoffrey, who lives in Chicago. Michael is a media relations consultant for Memorial Health System in Springfield, Illinois.

Looking for a Play?

Contact Michael for assistance with locating a play from Riley's Diner or his other works.